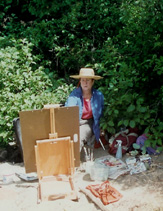 Renate Hulley is someone with a keen appreciation for nature and the beauty around her. An adventurer at heart, she has lived in many interesting locales that have inspired her artistic growth.
Renate was born and raised in Germany were she studied design at the Folkwang Art Academy in Essen.  In England she met her husband with whom she had four children and shared a love for adventure.  They lived in London, Uganda, Edmonton, Ottawa and the Canadian Arctic.  Life in Africa and the Arctic inspired Renate’s love for remote places.
In 1984 Renate received a B.A. with Honours in Art History from Carleton University.

After their marriage in Cambridge, Renate worked as a textile designer and had her first child in London, England. Soon afterwards she left with her family for Uganda, East Africa. Inspired by the country’s physical beauty and by the African people, she would take oil crayons with her when she went on safari with her husband to visit outlying parts of his territory. Three years later they immigrated to Canada. Renate had her fourth child in Edmonton. Renate was inspired by “the beautiful skies of Alberta” and was employed by the University of Alberta to teach an extension course in oil painting.

In 1969 she moved with her family to Ottawa. Over the years Renate has used various media including oil crayon, oil pain, acrylic, silk-screen printing, and most recently, watercolour.

Ten years after the unexpected death of her husband in 1991, Renate returned to the Arctic, this time seeing it by cruise ship. In 2001 and 2002 Renate returned to the Arctic for the first time since the unexpected death of her husband in 1991. She loves and respects this wild desolate land where images feel larger than life and the unique light adds drama. Her subject matter evolved and became Monuments in Ice and Stone. Looking at these striking formations she began to understand why the Inuit believe that all things in nature have a soul even the land, water and sky. Her latest watercolours of the Arctic  are based on sketches and field photographs made while in a moving ship or zodiac.  In her studio Renate creates variations of her subject as she becomes re-acquainted with the initial experience. 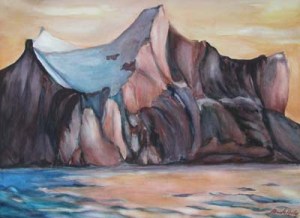 Renate has long been fascinated by natural forms. She loves the wilderness and aims to isolate aspects rendered by nature. Year after year she enlarged upon the themes of water and clouds. Her watercolours are mostly studio works and are based on field photographs and sketches. She creates variations of her images as she becomes re-acquainted with her initial experience.

Throughout her career, her still-life flower paintings have always been a favourite.